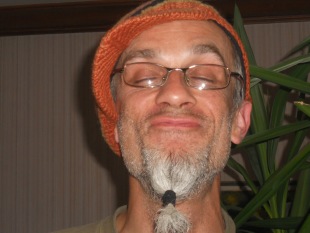 Alakrichman ( zeromoney, mister goat, daddy greg ) sings and plays many guitars and percussions. He is also a hip hop dancing machine. He lives in Rennes city. He plays with fred ka for a long time.

Started with a street band, "Jambon Purée", he played during five years in France, in spain and in greece. during 90s, he lived in paris. He played many lives (singing and playing guitar ud and percussions) with 2 bands : "Fleurz" (french songs, between les vrp and the fabulous trobadors) and ubik (imaginative folklore, with traditionnal and invented instruments) learnt many things with roumanian master Victor Stoichita [http://www.svictor.net/] composer of fleurz and ubik, ethnomusicolog, he played many instruments.

Alakrichman learnt ud with his syrian friend Korish Tabba. Learnt all secrets of rythm with indian master of drums and percussion, Ravy Magnifique. He stutied 5 years in his samba school in Ris Orangis. He lived in Rennes for 10 years. He made a band up up up, mix of groove traditionnal and reggae music, he was singing and playing guitar. he played and recorded with Yann Penn. He played with "Rasta Bamako".

He played the bass with many people especially with Fred Ka, brother for ten years. He danced with feriel Folla Foula. He played samba in school "Toucouleur". Specialist of pandeiro and guitar, and bass guitar. He loved playing and dancing, the sun and the moon, trees and birds...