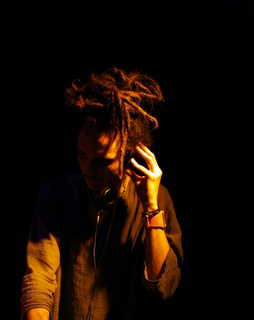 HOARANG is a French artist that had worked with numberous asian musicians and is a pioneer of the Dub and reggae scene in korea. He founded, with the drummer and singer Kim Bang jang,the very first dub band of south korea “I and I djangdan”, mixing Korean traditional elements (Korean traditional pansori music) with reggae/dub based rhythms,influenced by the French,Uk and Jamaican scene.

He was also often solicited to mix songs for the emerging bands of the reggae scene in korea like Kingston rudieska, windy city and soulsteady rockers and had collaborated with many international artists : dubnosmium (morocco), bandulu dub (Portugal), hornsman coyote (Serbia), srirajah rockers (Thailand),Hydro (UK).

The first ep of I and I djangdan,”culture tree” ,released in 2008 , has been well received by important artists that influenced their music : Adrian Sherwood, Twilight Circus, pressure sounds, the bush chemists. Hoarang also had the chance to test the temperature of it in Jamaican studios (cavemen) where it was very well receive too.

We will have to wait the 2010 summer to see the first I and I djangdan album “Guidance” released, as well receive as the late “culture tree”, it is now distributed internationally by Ernie B’s reggae store in the united states.

In the 2009 winter, Hoarang visited Thailand as a member of windy city to perform in the Smiley festival. They met the thai band srirajah rockers there with whom they improvised a little one month tour and then recorded and Ep together “windy city meets srirajah rockers” released in 2010 on his label BIBIM PRODUCTION.

After the release of “Guidance” Hoarang, Kim Ban Jang and Jung Hyun, decide to create another project : BIBIM DUB TRIO. Purely dub music, this UFO band has rocked several places in korea and their live videos spreading on internet where arosing interest in hoarang homeland, France.

After recording tracks for BIBIM DUB TRIO, HOARANG gone back to france, where the dub scene had become of the most prosper of the world, to mix their album and concentrate on his solo career, as well as other new projects. There he got quickly close to the pioneer sound system Zion Gate Hi Fi,Internationnal skankers HiFi, legal shot sound system, the acclaimed BETA SIMON from Ivory coast, the maestro player ADAMA BILOROU , and is currently working with them.

And they later created their own label “BIBIM PRODUCTION”, including the first acclaimed reggae band Windy city.