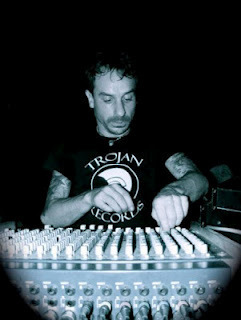 In 1997 MINIMAN makes his first steps in electronic music. The piano, which he has been playing since the age of 14, his love for reggae, his experiences in bands and soundsystem like ..ZION GATE HI FI.., naturally shaped his style.

“DUB JOURNEY”, was his first autoproduced album. Other songs also appeared on various compilations and other projects : ALTERNATIVE NOVO-DUB 1 and 2, DUB IN FRANCE, I DUB YOU, LINK UP. He also started live mixing. A series of 7 ” were released from his meetings with ZION GATE HI FI. ” DUBLAND “, the first digital dub release in France will appear in April 2002 on the album ” EN MARCHE POUR SION ” produced by a hardcore punk label, THE AGE OF VENUS.

Little by little, the sound widens its borders towards breakbeat, trip hop, Indus and trance. A sound enriched by samples, melodica, atmosphere and movie themes. SEVENSEALS, the 11 titles project named ..”STARS” ..was realized with a guitarist in June, 2005 on the same label and ” OPUS IN DUB MINOR ” went out in June, 2006 on HAMMERBASS An important step in style with the evolution of the rhythmic and a deeper and more cosmic ambiance.

From 2006 until today, his work focused mainly on the studio; few gigs, an intense musical search. The interest of MINIMAN in electronic and rock was revealed during this periode, to be a real source of inspiration. A back to the roots with fresh news and bass player who has just joined the project.