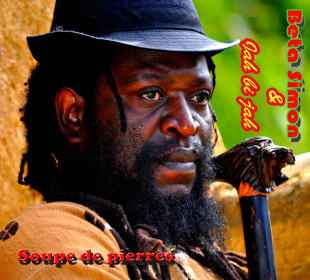 The language has a real importance in his way to write. He invented his own language, the baissade (the way to speak of Bailly a.k.a Beta Simon).

It is this language that he use as a pedestal to write his songs. It is the language of nature, birds singing , wind blowing, water flowing, the innocence and flexibility of the animals, the roughness of mountains, all possible images.

Author, compositor, interpreter of five albums and countless concerts gathering the masses, his music and songs, interpreted in bete, his mother tongue, in more , senofou, dioula and in wolof have made him an artist quickly going throught the borders of ivory coast, placing him as an unavoidable artist of West Africa.

Open to the world, Beta is a travelling artist, who is not hesitating to put aside his artistic carreer to feed his curiosity and spirit from the diverse culture that populate his continent. Strong of his experiences, the man tend his existence thought spirituality and wisdom. his previous album, "Kraity Payan Guez", produced by Tiken Jah Fakoly and surrounded by his musicians and arranged by Dave Kynner, have been very well recieved in Africa as well as in Europe on he musical and human level from the medias and melomanes sides.

The album is distributed in the french shops by Nocturne the 7th of may 2007. Since then, Beta had formed his own band Jah-Bi-Jah, composed of musical warriors, and tour thought the world.

His new album, "soupe de pierres"(stone soup), released in july 2011, has been completly realised as self production, and have been recorded in pablo U-WA's studio in noisy le grand, where Beta was accompanied by all his musicisians (Jah Bi Jah).